Day two was equally inspiring as the first day, with a focus on implementation and how technology is being used for good.

First up was the hilarious Melissa Wong, talking about Virtuo-Birthing and how VR can ease labour pain. She began by asking why VR was important in maternity and the answer was because it HURTS – as much as losing a finger.  She set the landscape by discussing other therapies that are used during birth and, based on research, what works and doesn’t.

VR can help through all phases of labour. A woman’s thoughts on how well she will cope with the pain dictates if she will go on to use medication. There is an audience that is willing to use alternatives to medication during labour – in a survey in Australia 73% of women would consider it.

Melissa showed images of a woman having a procedure to turn a baby in the wrong position. She explained the extreme pain caused by the procedure and pointed out that the woman in the photo was playing a VR game during the procedure - this clearly helped her cope with the pain.

Next to the stage was Milton Little, a specialist in Orthopaedic Surgery. He explained that there was an opioid crisis and reminded us that companies where making lots of money from this. 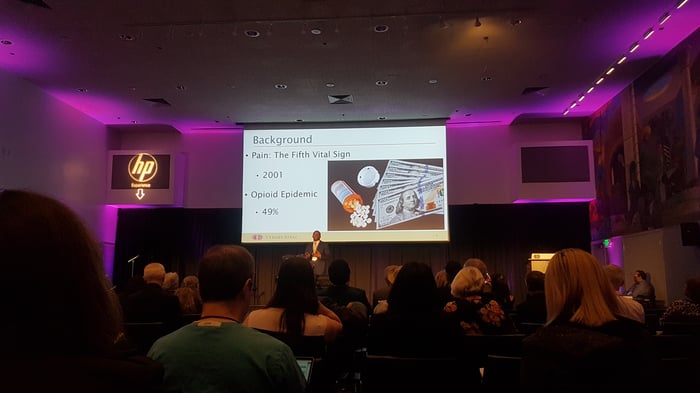 Milton shared an overview of his current study focused on  AppliedVR. A control group of 30 patients watched a relaxing TV show and 30 patients completed a VR experience. The results showed that VR had some benefits in pain reduction. 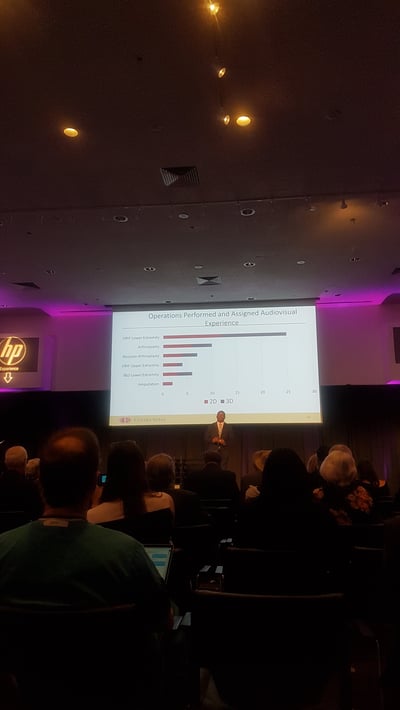 He pointed out that the VR did bring joy which is something that is really hard to create in a trauma unit.  The importance of joy is something we shouldn’t forget that VR can bring. 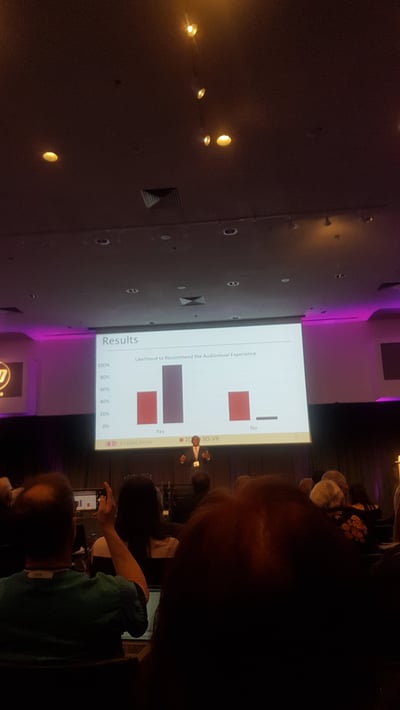 This trial was different because the patients could use VR at any time. This in itself was a challenge of logistics and technology. From making computers silent, to creating a touch screen that had big buttons so it was easy to use. 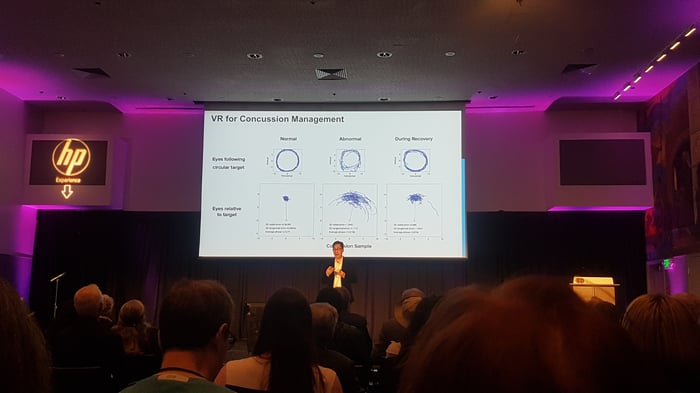 Rose mentioned that content was a pandora’s box – less can (and perhaps should) be more.

Finally, he spoke about scaling VR in hospitals and that as an industry, when we achieved 30% penetration this would be the tipping point.  Without a crystal ball, we don’t know when this will be. It could take three to five years, maybe more, maybe less. Howard ended with a rally cry for us to move beyond distraction therapy and move to active therapies. Distraction does VR a disservice. 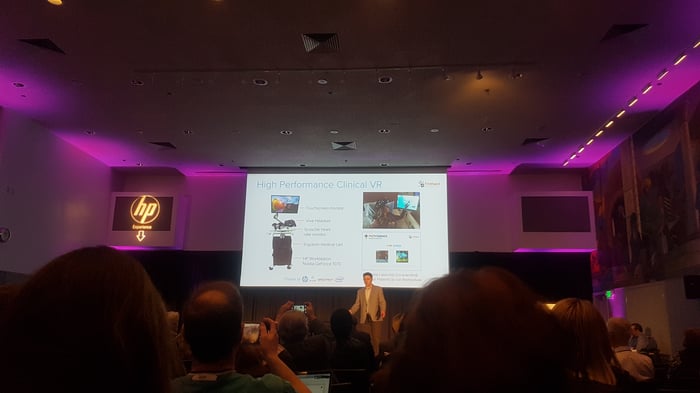 David also showed some amazing work in concussion management using eye tracking to test concussion levels in athletes.  There was also a tool to aid recovery. He spoke about how Samsung thinks about solutions holistically – nothing standalone can succeed. 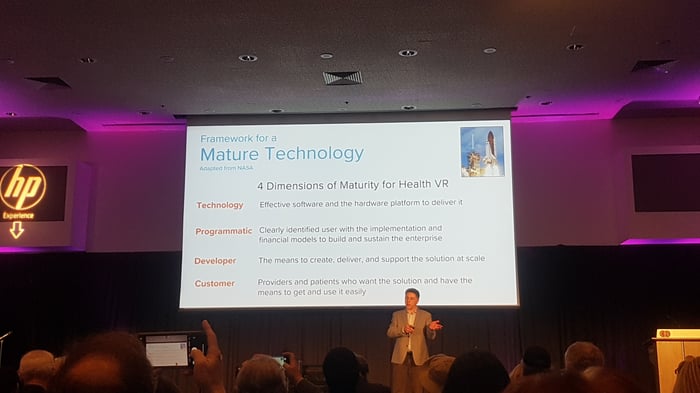 David showed a Digital Pain Kit that had recently been developed and his presentation touched on VR’s use with dementia and loneliness.

One of the highlights of the conference was the patient panel. Harmon Clarke gave a moving and inspiring speech about how his chronic illness nearly killed him several times. He shared that after extensive hospital stays and an addiction to opioids, VR saved his life, his words. VR helped Harmon manage his pain and his anxiety, but more than anything, it gave him hope that HE could take control of his pain. Harmon is now is a yoga instructor, an actor and by this performance, a fine singer: He even performed a rap with his Doctor Brennan Spiegel. 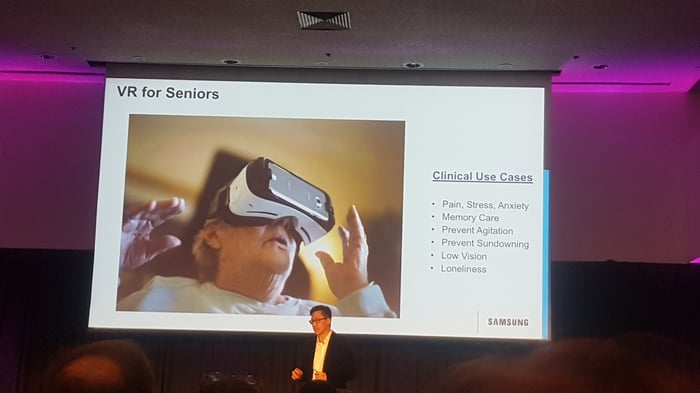 The patient panel mirrored Harmon’s experience with VR as people shared their personal stories.  Jason had a condition where his back muscles locked after surgery, leaving him staring at a ceiling unable to eat. VR, as a last resort, helped him relax and slowly unlock the muscles.  Interestingly a VR game almost made things worse, but a switch to a calming VR environment became the solution. This was echoed many times at the conference, VR doesn’t work for everyone one. Different experiences affect people differently with varying degrees of success. We must remember this is not a magic bullet for everything.

Tom was part of the American Chronic Pain Association and had been a long term sufferer. He has created his own pattern of using VR 3-4 times a day to reduce his dependency on drugs. One common issue with pain medication is the ‘fog’ pain opioids create. Tom mentioned that VR was not a help when the fog of pain grasped him, he need to use VR before these moments for it to help.

Mark Holden spoke about the same fog and how after an operation on a broken bone, VR allowed him to get back to work (a necessity as a freelancer).

Harmon spoke about how he used VR to help him to sleep in a hospital, something that was really really important to him. He also needed a virtual place ‘outside’ the hospital where he could go to meditate.

The afternoon continued with a series of breakout sessions. I choose two that were relevant to my work, Paediatric Applications and Integrating VR into Clinical Workflows.

The Pediatric Panel was amazing. Especially worth mentioning was the work of Thomas Caruso from CHARIOT – his team make VR and other digital content within the hospital. He shared VR success stories and the caveat that VR is not always the right solution.  For example, using an AR Hololens with an autistic child who didn’t want to use the VR headset.

Other learnings included the fact that small procedures won’t see a massive decrease in pain because generally there isn’t much pain.  However, VR can help reduce a patient’s anxiety about pain.

There was an amazing video of a little girl with Sickle Cell where the study showed an 18% decrease in symptoms. The video summed up the success with the little girl beaming as she told her story of how VR was helping her to get home quicker.

The Implementation of VR workshop included Thomas Caruso, Brennan Spiegel, Matthew Stoudt, and Dr. Grimes. The panel reaffirmed much of what had already been discussed throughout the conference. There was an interesting discussion about creating a VR department within the hospital.

One disappointing topic was the discussion about financial decisions that are made in the US. Counterintuitively, some hospitals see VR not as a way to save money, but as a way to lose revenue.

The grand finale was Shafi Ahmed’s keynote speech about surgical education. He described having had thousands of people watching and interacting with him while he uses AR and they watch in VR. He is undoubtedly the most watched surgeon in the world.

As the conference came to a close, Brennan reminded us of how amazing the past two days had been. While I didn’t attend last year’s event, everyone who had, commented about how quickly the industry matured in just a year.  I feel extremely lucky to be able to shape that future to some degree. I joined  other like minded individuals who have an overwhelming feeling of opportunity. Good can happen in many places and this year, for VR, I think will be about focus and implementation.