Our DR.VR+ platform is a perfect solution for care homes, helping reduce the anxiety for older people and Dementia suffers. Improvements in VR technology has brought it out of the research lab and into the main stream. Research has been done for many years which proves the future of VR. 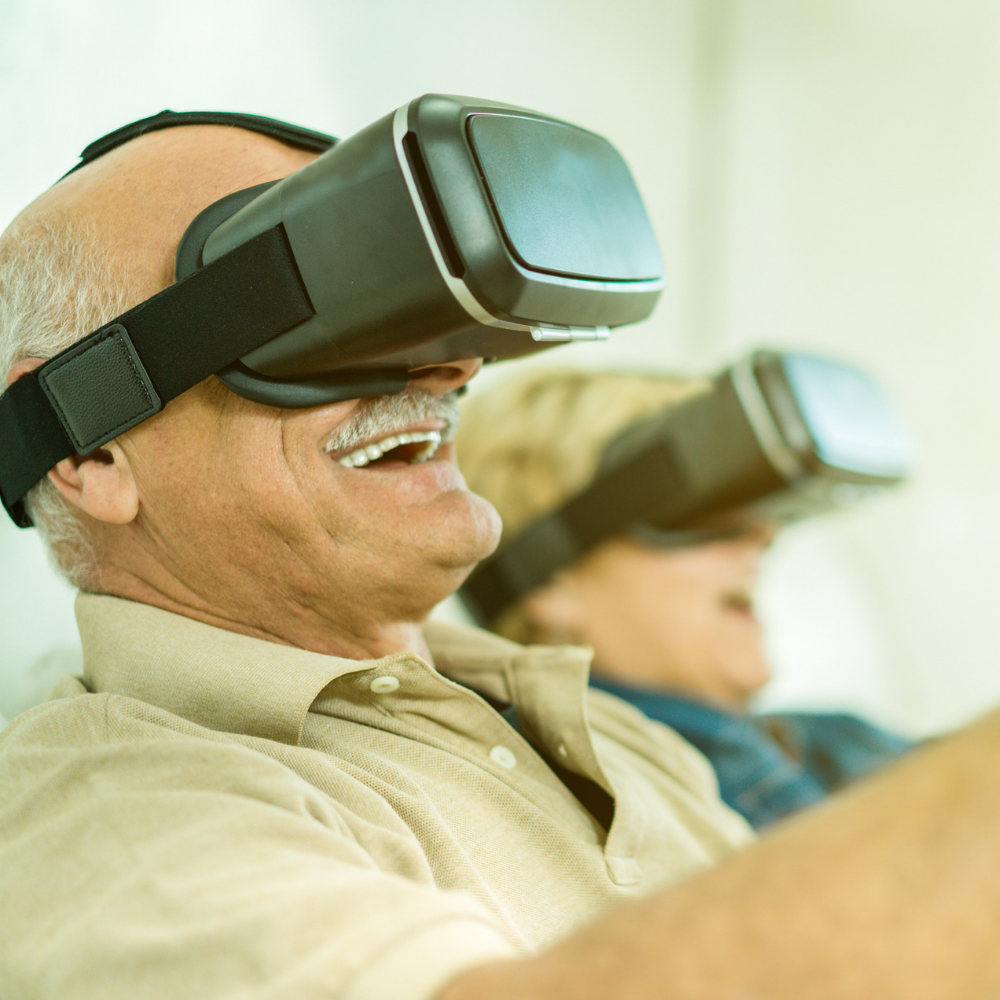 How does it work?

VR distraction therapy effectively immerses a patient, this tricks the brain into being present in another reality. This overwhelms the brain with information which leads to a reduction in anxiety and pain.

Our experiences have been carefully designed to unlock the power of VR – from diving in tropical waters to traveling the solar system. These experience have noticeable effects on older people, allowing them to open up and feel less isolated.

VR can also connect people in new ways and DR.VR+ gives older people new ways be involved – we have taken people (virtually) to family weddings and walks up a favourite mountain. These moments are valuable to us all and can be implemented by staff and family members.

Find out more about how DR.VR+ could help your team below...

Dementia is a decline in cognition in one or more of the following capabilities:1

For clinical relevance, these deficits must be documentable as compared to the previous unimpaired activities of daily living (ADL). Documentation is typically a tally of the obvious, since caretakers and loved ones will bring patients to healthcare professionals after noticing the declines themselves. Often the above deficits blend.

Dementia represents a continuum of insidious onset and relentless progression, from mild cognitive impairment (MCI) to more advanced cognitive impairment (dementia). The earlier stages, MCI, present challenges since they can arise from non-organic sources, such as depression, side effects of medication, or acute illness. These latter causes are often reversible, but to date there has been very little success in reversing—or even stabilising—progression through the continuum to overt dementia. This failure is a result of actual organic illness (physical disease) causing the problem, and failure to impact the organic illness portends poorly for impacting dementia positively.

As the population ages, dementia becomes more important since 60-80% of cases are due to Alzheimer disease, technically an organic illness characterised by the accumulation of amyloid beta plaque deposition and tangles of tau protein (p-tau). The plaques are thought to be a problem with efficient turnover (production and removal) as a consequence of aging in those genetically predisposed; the p-tau is thought to be an immunoreactivity of aging neurons. Vascular involvement is another cofactor as vascular brain injury adds diminished oxygenation to the mix. Superimposed additional risks include hypertension (which begins and worsens with aging), abnormal lipids (diet-related), Type-2 diabetes and obesity (age-related), second-hand smoke exposure, and diminished physical activity.

Therapy and research for reversing or stabilising Alzheimer disease has therefore focused on altering the brain’s cholesterol metabolism, reducing the presence of amyloid beta plaques and p-tau tangles, and addressing cardiovascular contributions to the disease.

Never the Twain Shall Meet

Dementia can occur due to both organic or psychiatric mental illness, which are designated as separate distinctions. The psychiatric division of dementia is identified readily because it presents as more than mere dysfunctions of cognition: there is often a disconnect from reality. Regardless, in both the end result falls together along the bullet list of characteristics listed above. Medical approaches for organic illness and psychiatric approaches for psychiatric illness can overlap, making any judgment of efficacy for a particular therapy confusing.2 In short, it is as if the science of treating dementia has dementia.

Often the Twain Shall Meet

The human brain is each person’s universe. Perception of the laws of physics—sight, hearing, touch, balance, etc.—is what creates a unique universe for each of us. The collection of neurons and their interactions with each other makes each person’s ability to relate to others’ “universes” unique. Nevertheless, in different persons the cell structures are the same; the neurotransmitters are the same; the self-awareness/consciousness is the same. It makes sense, therefore, to offer a common re-learning process to those who lose the connections that store what has been learned over a lifetime—either from organic or from psychiatric dysfunction. 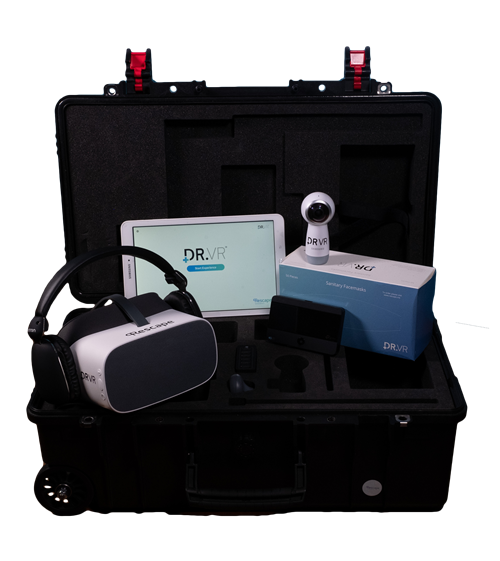 If one were to reverse engineer the human mind, from that of the aged to childhood, what is lost from the mind is as easily identified as the loss of coordination, strength, and agility. Learning turns out to be very important when measured in what has been lost at advanced ages from what been learned in youth. As such, the deficit of memory is a particularly cruel bullet point (above).

The mind is our consciousness separate from the mere consortium of nerve cells and neurotransmitters. The sum is greater than the addition of parts and we rise above just the data to navigate our universes—inside, outside, and in co-existing with others. One of the most powerful embodiments of this is the childhood capacity to wonder. Wonder is learning.3

Because of the organic deterioration of these parts of the brain and the subsequent psychiatric dysfunction in the more primitive, emotional parts of the brain, the different tasks that address wonder fail to perceive it as wonder. Instead, the faulty processing is a dead end: no wonder, no “ride,” no learning, no collaborative volitional activities of daily living—physically, rationally, or socially. Memory of unrelated items (e.g., names in a phone book) is difficult even in those who have no deficits!

What if a different universe via virtual reality (VR) were presented in which the presentation was deemed trustworthy and safe?

When one rides a rollercoaster, danger is perceived by our primitive brains. Speed, centrifugal forces, and unnatural gravitational sensations are entered for processing. However, our rational brain recognises the science and safeguards and centripetal containment (seat belts or bar restraints) that make fools of the primitive parts. The battle between the two is the real impact of the ride: it is a thrill—both fight and flight at the same time. The thrill of danger in a guaranteed safe environment makes for the complex psychological result: fun. Fun adds an entirely different set of neurotransmitters4 to cognition, processing, and even learning.

Swapping out universes via the immersion of virtual reality means the presentation can be altered and controlled. Those who retain enough orientation will know that the new universe is a “safe” environment contained in a wearable display. This allows wonder and learning, and learning rewires the brain in a process called neuroplasticity.5

Those who are so dysfunctional that immersion into a different virtual environment cannot be separated from their false perceptions of actual reality require more work, along traditional routes, until their perception allows this different “safe” reality to proceed and restore their sense of wonder, fun, and learning. The strength of VR is that it can be authored, perhaps as an environment a patient with dementia will remember (identify with) as safe. For example, a familiar place depicted years earlier with the conventional presentations of the times—model-year cars that are familiar, previous urban landscapes, etc. In this way, virtual reality is not a replacement for traditional approaches, but a valid adjunct that can potentiate them. Reality Orientation (RO)6 trials have already shown that re-learning can positively impact mood and self-esteem; self-esteem is especially important in one’s quality of life,7 because the hopelessness of dementia-related confusion puts self-esteem in extreme jeopardy and engenders depression8,9 which can fuel a vicious cycle.

Immergo, Ergo Sum: I Immerse, Therefore I Am

Awareness of self in space and time is consciousness, and suspension of disbelief can be cultivated so that those with cognitive deficits can embark on the “ride” of discovery, learning, and wonder, apply the experience into the familiar mental pathways, and reinforce via neuroplasticity what may have become a lost process. What VR therapy promises is a return to a safer time in someone’s mindset, when things were not confusing, nonsensical, or seemingly dangerous; when self-actualisation becomes its own reward and the reward, brokered via the right neurotransmitters, can rekindle one’s smoldering ashes into a better clarity.

The brain’s anatomy is designed to take unknown, new, or unrelated things and make sense out of them. This “ride” is wonder, and addressing novel presentations is how the brain learns, sorts out and organises itemised incongruities, and stores them into memory for retrieval on-the-fly when needed.

Memory is the retention of what has been learned. In his book, “The Brain that Changes Itself,” Norman Doidge states, “Neurons that fire together, wire together.”10 VR has the advantage of convenience, not constrained to classes, timed events, or presence. User-operated, it allows repetition until the desired effect—memory and learning—is hard-wired.11

Language is communication. Patients who experience language deficits are similar to children with autism in which the parts for deciphering symbols, associating them with what they represent, and developing an innate equating of them with objects or intangibles becomes disjointed. The repetitive reinforcement of language and what words mean is the first step, which becomes the foundation for syntactical appreciation for what is being conveyed. For example, a sentence is in a sense a mere list of words; however, how they’re arranged and how they’re appended with prefixes and suffixes gives sense to the sentence. If firing together wires together neurons, then repetition is the ideal method for language and the learning and memory upon which it depends. So much in life is how, why, when, and what that there is no overemphasising nouns, adjectives, verbs, adverbs, and prepositions. A lost art, diagramming sentences, can be overlaid on a VR immersion as actions ensue.

VR can be authored for specific movements that will strengthen proprioception (reducing falls) and purposeful movements. In the human brain, “mirror” motor neurons fire whether an action is seen, heard, or performed. This portends well for benefits of VR and advancement from see-and-hear to perform.12

There are rules of society just as there are rules of physics. If VR can be used to navigate the universe—albeit a virtual one in preparation for the real one—then incorporating a social interaction component can begin early in the memory/language/attention process. The acceptance of mirror neurons associated with motor perception has led to an appreciation for similar mirror neurons for empathy which are then used to assess the intentions and mental states of others.13 VR is fertile ground for “parable” training.

It all comes down to the frontal lobes, where executive decisions are made based on the cognitive functions of it and information preened from the rest of the brain. In other words, frontal lobe function depends on general intellectual ability.14 As such, VR therapy to improve executive decisions is not an independent target, but a beneficiary of all of the above targets of therapy.

VR offers adjunctive therapy to conventional therapy and can be tweaked, intensified, simplified, and even administered for reinforcement of gains accomplished. This makes sense in the care of those who are en route to mortality with a fatal disease, because the time-urgency makes dementia an emergency. Rewiring together neurons that have become unwired makes virtual immersion easy, convenient, safe, and engaging. There is no downside. For those who suffer dementia VR can be an important, if not crucial, therapeutic activity whether implemented at home, in a facility, or in outpatient programs.

Simply fill in the form below for instant access to our DR.VR brochure.